From journalists to judges, the phrase ‘without fear or favour’ encourages those with power and/or influence to behave with fairness as their top priority.

But we are all tempted to act in favour of ourselves, or those who are our friends or family members, and to avoid getting into trouble with those that we fear. Another word for this, particularly in political circles, is corruption. Unfortunately, examples of political corruption and selfishness features all too often in the news.

Ask the students to watch this clip from the film, Courageous: www.wingclips.com/movie-clips/courageous/double-accountable

and then to discuss such questions as:

Explain to the students that one example of corruption is where people deliberately give their friends and relations an unfair advantage in gaining job opportunities or promotions. This is known as nepotism (from the word for ‘nephew’).

Show students the nepotism graph found on the next page and explain that the y axis shows the incidence of sons working for the same employer as their father, and the x axis shows the father’s earnings percentile in the national economy, e.g. those at the 99th percentile are in the top 1% of earners, i.e. the further to the right of the graph, the wealthier the father. Explain that in 2012-13 in the UK, people earning more than £156,000 before tax could count themselves in the top 1% of earners (http://en.wikipedia.org/wiki/Income_in_the_United_Kingdom).

Ask students to study the graph and to work out:

Get some feedback on their ideas. Where would they draw the line in helping a friend or relative? Ask them to reflect on whether their ideas are consistent with the encouragement to act ‘without fear or favour’. 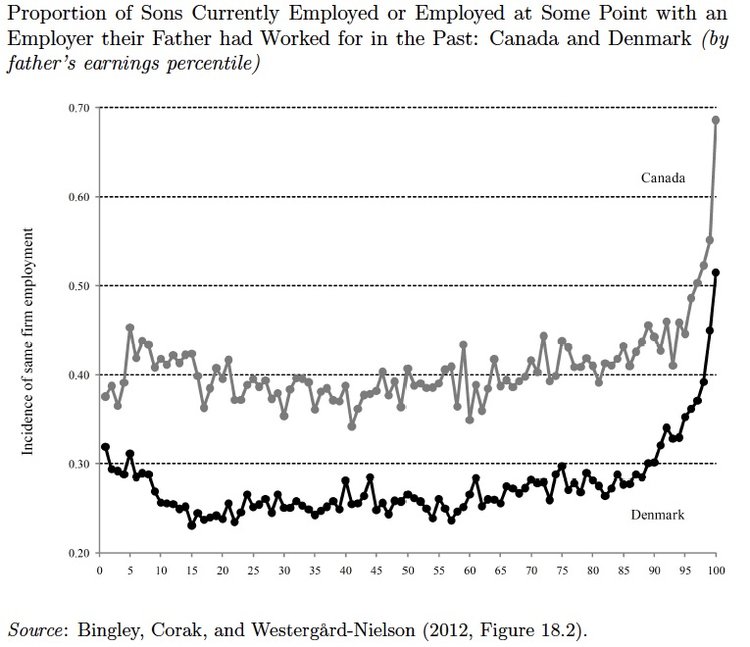